In ancient Biblical times, Beersheba was the first city in Israel that our forefathers (Abraham, Isaac and Jacob) settled in. It was a lush oasis of palms and wells in a comfortable weather zone on the edge of the desert, close to the more inhabited area of Jerusalem. It was also close to the major route of trade from Arabia and Egypt to the Levant.

Later in history Beersheba was desolate for long period of time until 1900 when the Turkish Sultan decided to establish it as a desert centre of commerce. He hoped to draw the nomadic Bedouins to live and trade in Beersheba so that his government could tax them. He built a beautiful desert city made of local lime stone with Mediterranean architecture (stone houses with waterholes, arches and palms in their inner courts). The style of building (engineered by Germans and Turks) and the special stone used is unique to Beersheba. It is the only city established by the Ottoman Empire in Israel during its 500 year conquest of our land.

At the beginning of the 20th century there was a very small minority of Jews living in Beersheba. One of them was Chacham Nissim Elkayam. He was a trader from the Jewish community in Gaza that had good relations with the Turks. He had a small stand where he sold goods from Gaza, Damascus and even Albania (such as small Arab daggers, halva from Jaffa and olive soaps from Nablus). The Bedouins would pay him with barley that he exported to whisky factories in Scotland. They also exchanged with him a small fruit called “Chandal” (Bitter Gourd). It resembled a small watermelon and tasted like fire and he exported it to the German pharmaceutical giant “Bayer”.

Nissim Elkayam was a famous Jew at that time in Beersheba, as well as a close friend of my great-grandfather Tsvi Hirshfeld. He helped him purchase land from Ali Atawna (an important local Bedouin Sheik) in order to establish the first Jewish settlement in the Negev during the rise of the newborn Jewish state. Tsvi also dug the first Jewish well in nearby Ruchama in 1912 and that is where our personal romance with the Beersheba area started as a family.We decided to call our guestrooms The Well Guesthouses because of our connection to this history. Also, both of our guesthouses are found in the Negev well area: Beersheba being close to Abraham’s well, and Ezuz (also known as Beerotayim -the place of two wells) situated next to the wells of Moses and Aaron.

The original buildings of Home in the Old City were built from lime stone by the Turks. They were deserted when the State of Israel was established. In the 1950’s they became part of the compound of the famous Hadassah Hospital (the first hospital of Beersheba). The staff of the hospital lived on site.

One of our houses was owned by Ruth Shilat, one of the first midwives in Beersheba. Her husband, Israel Shilat, was an “etzel” warrior who also managed the administration of the hospital. Israel later became the personal counsellor and close friend of Israeli Prime Minister Menachem Begin, who often visited this home and really liked to drink herbal tea with lemon in its charming inner courtyard.

The second house in Home in the Old City was the house of Yoshke Shpitser, the chef of Hadassah hospital. We know from tales told us by people who grew up in that neighbourhood that everyone licked their fingers when they ate his special Hungarian cakes…yummy.

These homes were deserted for many years until 2014 when Eyal and Avigail Hirshfeld renovated them, creating a masterpiece of art for delighted guests from all over the world to stay in. The whole area is beginning to enjoy a big boost of development and restoration and is on its way to becoming the jewel of the desert as it was in Abraham’s days. 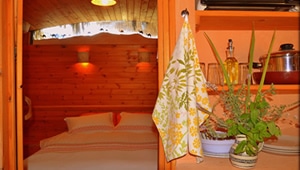 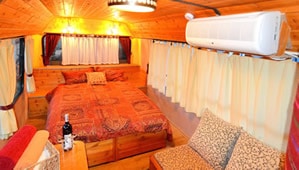